Are you a man who’s intimidated by joining a group fitness class because you’d be the only man among all those women? We often hear of intimidation when it comes to women venturing in the free weights area of a gym. But men can be equally intimidated in a group fitness class, since these classes are often exclusively women: step, high or low impact aerobics, yoga, and of course, classes that utilize dance movements. 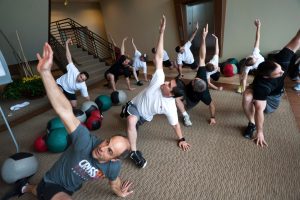 Dan Collins was one such individual. He’s the senior director of media relations at Mercy Medical Center in Baltimore. The hospital had a step aerobics class a few years ago. “I was the only man in the room,” says Collins, who was 39 at the time. “And yes, it is a tad uncomfortable at first.”

I used to participate in step aerobics quite often at varying gyms, and sometimes there’d be a man in there. It wasn’t uncommon to see a man fumbling with the moves and getting confused and not being able to keep up, while the rest of the class — all women — followed the instructor in perfect unison.

Collins says, “There are ways to cope. One, all things being equal, I find women to be more self-conscious about their appearance than men. I’ve had many women friends tell me how they aren’t big fans of going to the gym because they feel they have to look great. So my message to men is, likely the ladies are going to be at least as uncomfortable as you are.”

“Secondly, some might say that that’s actually a plus for men, particularly single men — you are one man among all these health and fitness conscious women. No competition! What’s not to like about that?”

“Finally, it’s the kind of uneasiness that wears off in just a few minutes. Once you start the workout, I find the mind gets focused on the exercise.”

I’m a certified personal trainer. My advice to men contemplating foraging into that all-women step class: Don’t get ahead of yourself by setting your step platform higher than you can handle. If you’re not conditioned to stepping exercise (which includes uphill hiking), then use one “riser” level to start. Otherwise, two risers may tax you quickly, since many of the moves involve kicking the knees up high, pivoting and lunge motions.

Maik Wiedenbach, 34, owns Adlertraining TM in New York City, which services high-end clients. He actually experienced some intimidation when clients, who teach at Exhale Spa, invited him to take a class. “This caused me some anxiety,” says Wiedenbach, because he is much larger than the average woman — larger, as in gloriously adorned with rock hard muscle.

However, he also has this to say: “I was worried about being perceived as a ‘weirdo’ who is looking for a date in class (I am happily married). So I entered the spa, being the only male in sight, and yes, I did draw looks, but nothing as I expected.” 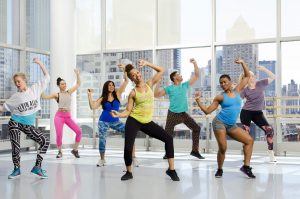 “The class itself was fun. However, things like ‘Hold your arms over head’ are harder when you are 230 lbs. Then there is the flexibility issue. My advice: Girls just are limber, so do not try to do everything they do. Overall, it was a fun experience, which I intend to repeat.”

Berj Alexanian was 19 when he ventured into a spin class for the first time. Alexanian, an account executive from Chicago, says, “Going into the room on the first day was definitely intimidating. As I walked into the class the majority of people there were women that I could tell right away took this class very seriously. I felt awkward walking into the class with just a t-shirt and gym shorts while everyone else was wearing compression shorts and special bike jerseys.”

For guys who feel awkward about the idea of trying a spin class full of women, nowadays more and more men are participating in spin classes.

Alexanian says, “My advice is to do some research into what the appropriate attire is for these different types of group exercise classes. Also, it is important to focus on what you personally want to get out of these sessions, as it will help you feel less intimidated if you have a specific game plan coming in.”

Written By
Brandon
More from Brandon
The Bernina 1090 sewing machine is not a new model. It was...
Read More